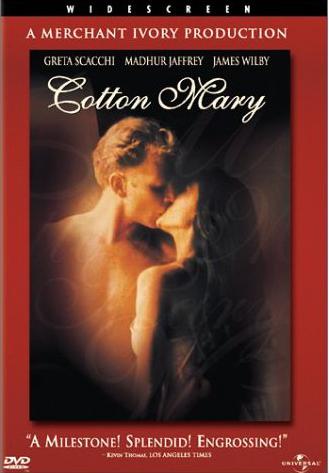 Set in post-colonial India of the 1950's, Cotton Mary is the story of two Anglo-Indian (part English and part Indian) sisters. Cotton Mary and Blossom, their niece, Rosie and their tangled and complicated interactions with a British household. The drama centers on the relationship between Cotton Mary, who dreams of realizing a British identity and Lily Macintosh, a young woman recently returned to India to live in her childhood home.

Lily's husband John Macintosh, a correspondent for the BBC in South India, is absent at the film start when Lily gives birth two months early to a weak and sickly child. Against the backdrop of Vishu, the Keralan festival of lights, Lily is rushed to an old British Military Hospital now staffed by local Indian doctors and nurses including Cotton Mary and Rosie. The hospital sets the stage for the first part of the film when Lily is unable to nurse her child. Despite the efforts of the hospital staff, the child is close to death when Cotton Mary comes to the rescue by stealing the child away to crippled sister Blossom, who is a wet nurse in a nearby Alms house. Still living in the past when her life was peopled by British ladies of the Raj and their children----Blossom and the other Alms house ladies are revived by having a new white child in their midst.

Mary's devotion to the baby and her success in arranging for the feeding make her indispensable to Lily. When John arrives at the hospital and is unwilling to discuss the baby's condition, Lily reaches out to Mary for help. Fearful that her already disintegrating marriage will suffer further because of the child, Lily offers Mary a permanent position in their home as the baby's ayah (nanny).

Lily wholeheartedly accepts Mary and delegates more of her responsiblities as her own insecurities begin to overwhelm her. Alienated from the small expatriate community whose attitudes toward India are of her mother's era, Lily becomes more and more isolated. Blaming herself for her inability to feed the baby and for the child's weak condition, she gradually loses confidence in herself. Emotionally distanced from her husband, Lily withdraws to her garden and into herself. Gradually Mary usurps the powers of the loyal family servant, Abraham, whom she accuses of stealing, and more importantly, of being dirty. Boasting to her sister and the other ayahs that Master is building her a house in England, near Wellington Castle, Mary begins to achieve the identity she desires.